Let Us Together—Grow a More Just & Lasting Future for ALL! 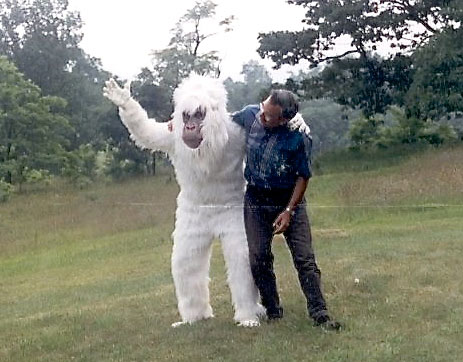 Change approaches with opportunities to advance both human lives and Nature. We enter an age of risks—to reduce them we must take risks. My life shows this is fun. Answers then self-assemble, and here is proof of that.

One example is my discovering the Yeti—I worked that puzzle for 26 years—with the mystery scientifically explained, then I launched national parks across the Himalaya. Distinctive about these parks was their being created by, and now run by, partnerships with communities that improve peoples’ lives.

Another example is creating a university—a new type of university where learning centers in communities. Seeing risks coming, I co-chaired a partnerships so we could learn together how to assemble better futures for people and the planet.

Action protecting Nature in Nepal, China, and India, through setting up the series of national parks and nature preserves led to research. The research sought to understand the dynamics driving community-based social change—because aside from the grandeur of Earth’s greatest mountains the strength in their protection came from improving the peoples’ lives who were doing the protection.

The research on how to protect the planet and prosper peoples’ futures, began in a charge from UNICEF in 1992. To lead that, I left leadership of The Mountain Institute. Coming out of the research is now the world-circling family of Future Generations organizations, diverse demonstrations in many countries, and most recently our community-based university.

But back to the abominable man. Yes, Yetis exist. Mysterious footprints prove it, footprints that have been found in the snows for a century. Some real animal exists when real footprints exist. Differing footprint sizes suggest adult and juvenile Yetis—get ready, folks, many Yetis. Discoveries of across a hundred years suggest a population that is breeding. Myths do not make footprints.

Those footprints led me down the trail that resulted in the national parks and is told in the book YETI: The Ecology of a Mystery, Oxford University Press, 2017. But, as sections of this website show, the path of my life fed in complex trails with multifaceted consequences now.

The national parks founded include Makalu-Barun National Park in Nepal. Followed by, a ten-times larger park: Qomolangma (Mt. Everest) National Nature Preserve in China’s Tibet, then the 1,200-acre Lalu (Lhasa) Wetlands National Park behind the magnificent Potala Palace. After that, Four Great Rivers Nature Preserve, forty million acres, protecting one-seventh of China’s forest reserves. While developing these, we worked with the Tibetan Autonomous Region government to implement a Tibet-wide ban on the sale of all wildlife.

Parallel projects began in northeast India in the state of Arunachal Pradesh. As action linked to research progressed, it became clear that enduring and affordable solutions could improve people’s lives and grow enduring environments. The big finding was communities can advance by learning. Understanding this opened opportunities for communities around the world.

The SEED-SCALE approach explains how, an understanding initiated by the UNICEF task force I co-chaired from 1992-95 with my father. Explaining this are two books Just and Lasting Change: How Communities Can Own Their Futures 2nd Edition (Johns Hopkins University Press, 2016) nd Empowerment: From Seeds of Human Energy to a Scale of Global Change (Oxford University Press, 2011).

We, as people, can improve the environment and our circumstances. Another website, gives details about SEED-SCALE. www.seed-scale.org

I try to build better life aspects: An octagon-shaped three-bedroom house, where the aim was to maximize energy efficiency by minimizing outside surface area to the weather. I cut the timbers and hammered it all together. For its energy source, I put up a 4,000kw electric wind generator.

Homebuilt airplanes too -- from fiberglass where the little wing is placed forward and the big wing behind, making an plane impossible to lose lift when flying. My first attempt was called a VariEze to carry two. The second is called a Defiant, a twin engine; it carried four people and flew at 165 mph.

Perhaps the craziest project was introducing Marco Polo’s lost dog back to the world– the KyApso, or Bearded Tibetan Mastiff. Six dogs were brought from Tibet’s Mt Kailash region. Sadly, we had to close this project as the dogs could be ferocious. Marco Polo had brought one dog when he returned from China in the 13th Century, and it became founding stock for the big shaggy European breeds such as Swiss Mountain Dog, Briard, Great Pyrenees, and St Bernard.

Beyond this website, some of these stories are told in my non-scholarly books: The Mount Everest Guide to Off-road Driving has, which to my surprise has become sort of a best seller. Field notes from 45 trips to Tibet were woven into a novel, CAIRNS, about Old Tibet. There are many more great adventures, though, including 12 first ascents of peaks, two first descents of Himalayan rivers, and in North America the first ski descent of Mt Logan, in Canada’s Yukon Territory.

My Homes at Headwaters, Potomac River

In 1973, home became mountaintop meadows fed by clearwater springs and welcoming forests at the highest point of Potomac River. With friends, we launched Woodlands Mountain Institute, later called The Mountain Institute, now Experience Learning. My career began -- it has held the consistent thread of enabling people to learn from the real world.

First, we lived in quaint tiny yurts. As our family began, from timbers harvested from the forest, I built a double-storied octagon home powered by electricity from the wind. The photograph at the top of this page is the view this home enjoys across the meadows. Surrounding are a million acres of national forest. Each morning, wildlife come out of the forest into the yard. A place with Nature, where the only human-made sounds are from jets flying six miles above.

In 2010, opportunity came to rehabilitate a 266-year old watermill, now a National Historic Site; its been working since before America became a country. The interior we rehabilitated, highlighting the massive 40-foot long timbers and antique paneling with outlines of animal skins on the walls—adding modern wiring, plumbing, and separating the huge spaces into rooms. The exterior maintains the historic design.

The mill perches above a 12-foot high waterfall of the Thorn River that tumbles into the South Branch of the Potomac (there is a 10-foot deep swimming hole). The waterfall is coming back to work with a high-efficiency hydroelectric turbine. The Potomac is well-known. The Thorn is an unknown marvel. Fed by high-volume springs, kept cool by rich forested overstory, the Thorn has some of the finest native trout habitat in the Eastern United States.