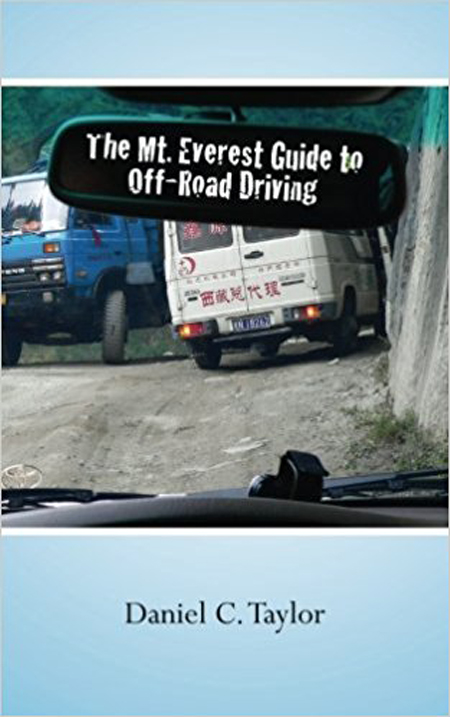 Big differences exist between travel in the Himalaya and the rest of the world, but lessons from the Himalaya can amplify many of the basics of driving—whether it be hard pavement driving in New York or Tokyo or outback driving in Africa and the American West. The processes are the same.

Your imagination of Himalayan roads is correct. For much of the year, the tracks are narrow, and the road surface loose-rolling gravel. Dust turns to mud with summer rains, and becomes ice in winter. The margin is thin while taking the turns on those narrow ridges. There are no guard rails with often precipices that fall hundreds of feet. Himalayan drivers are forced to learn correct braking and steering. Explorers of the macadam landscape do not pay attention to the basics of how to turn, how to cross a bump, how to monitor their vehicles. So, for these explorers of the rush hour, this book may be useful as well as a fantasy trip. For those of you who drive in other equally wild parts of the world, the lessons of the Himalaya may save your hide from bandits or hours of your life from being spent in mud.

I first realized this book was needed one afternoon as we were leaving the great drainage of the Yangtze and entering the deep gorges of the Mekong. Our Tibetan driver was taking a Toyota Land Cruiser down a 17,000 foot pass at 80 kilometers per hour. About a meter off to the left of our wheels was a 1,000 foot drop. My friend, Sal shouted, "Slow this guy down!" I've known Sal for years, and that was the first time I'd heard her shout from fear. Minutes before, Carl had also told the driver to slow down. The driver was proud of his driving—as most of us are, regardless of our actual ability—but it took some more shouting to bring him under control.

Over the next miles, as the panic and Adrenalin subsided, I realized that only part of the problem was the driver's speed. What had really scared us was the incipient feeling of being on a rocket about to launch out over the precipice, as the driver braked in the middle of turns. He'd resorted to this death braking (see text) because, like many of us, he didn't know how to make precise turns. My shouting was only making the driving worse. So, I reached into the back of the Land Cruiser, tore off a cardboard flap from a box of noodles, and started to write on the flap tall he other things the driver needed to know.

The fellow was working at a disadvantage. At that moment in our trip we were in the fifth week of high pressure traveling, attempting to gather a massive amount of data by traversing the upper reaches of the Yangtze, Mekong, Salween, and Brahmaputra rivers. One week earlier the pressure of our schedule had burned out our first two drivers after 5,000 kilometers. From the Lhasa motor pools we had found another two drivers who were willing to leave the comforts of the city and put in twelve hour days driving through some of the hardest terrain on Earth. Both of these drivers had jammed out another 3,000 kilometers in the past week, over roads of snow, mud, sand, and steep grades with very narrow turns. This fellow was doing the best he could. But as we took those turns each of us could feel in the seat of our pants that he was out of control. A well executed turn (or a poorly executed one) communicates itself to the seats of all the pants in the car.

The day before, the other driver had clobbered a rock on the road and split open his crankcase. We had plugged the oil leak with soap and cotton (see text). Three days before that, the driver of our vehicle poured cold water into his hot engine and cracked a cylinder wall—so now we stopped regularly to top up our radiator as steam flowed wispily out the tailpipe. As we drove, mud hole after mud hole, we found ourselves getting stuck far too often. The insides of our vehicles were growing a thicker and thicker layer of mud that we brought in each time as we climbed back in after piling up rocks under wheels and pushing the Land Cruisers through quagmires. Learning how to use four-wheel drive is also a basic need I wrote down on that cardboard flap.

All these crises I noted that day could have been avoided. The way to help was to bring together in one place the lessons of experienced drivers from the Himalaya and from other places.