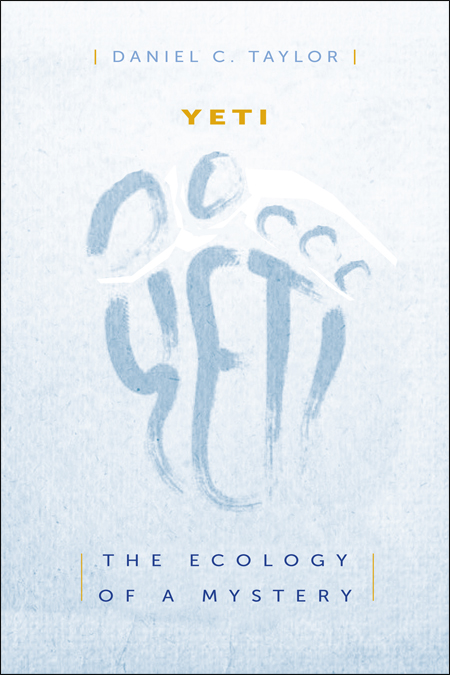 YETI
The Ecology Of A Mystery


(Oxford University Press, 2017) Yeti – The Ecology of a Mystery, explains the mystery of the Himalayan Yeti or Abominable Snowman, the creature that has left mysterious footprints in Himalayan snows. The book also explores why people are so fascinated with the possibility that a wild hominoid might still reclusively live (the idea of a wild humanity alive in people's hopes). Here also is the extraordinary story of one man's conservation impact-a quest for mysterious animal – Himalayan Yeti, which caused him to lead in creating two massive national parks around Mount Everest, one in China/Tibet and one in Nepal.

This book not only scientifically answers the questions – Are Yetis Real? & What is a Yeti? But also describes a range of Himalayan animals and plants, it also brings forward a wide scope of ecological understanding. Additionally, the author explores what it means (and how important it is) for people to be part of 'the wild' in today's increasingly domesticated world. Taylor's breadth of Himalayan knowledge is massive, the story captivating and full of surprises-and what he has accomplished includes 'discovering' the Himalayan Yeti as well as creating two huge national parks.

About this mystery of the Himalayan Yeti, legends assert that an animal much like humans inhabits the snows around Mount Everest. Turning the legends to serious inquiry are footprints. Stories do not make footprints—thus, if footprints exist, the maker of those footprints must also exist. And footprints that keep being found in the same basic structure across more than 100 years mean the evidence is not that of one aberrant animal’s trail, for if the prints were made by a freak, after some years that individual would die and the distinctive tracks would stop being found. Moreover, the same basic footprints found in multiple sizes suggest a Himalayan Yeti population that is reproducing.

This book clarifies what animal leaves these footprints. Various explanations were being advanced when I began the search. The prints might be made by an unknown wild man who for more than a century had eluded identification. They might be by an unknown animal but non-hominoid, related perhaps to the giant panda or gorilla with whom the footprints shared intriguing resemblance. A third explanation was the maker was known, but not yet recognized as able to make human-looking prints. And, of course, a fourth possibility— Himalayan Yeti is a materialized spirit: not an animal, but a supernatural being, Science asserts, cannot, must not, exist.

Giving credence to the debate are always the footprints. That footprints were being found was never in doubt. Some ‘thing’ was making footprints. Still today, the mysterious prints continue to be found. Photographs are repeatedly taken. Thus, the Himalayan Yeti is real, for imagined animals do not make footprints. Footprints are made only by real animals. So, as with Mount Everest, the Yeti is ‘there’, and as with those who sought to climb Mount Everest, I began a search to explain the footprints.

My search included discovering prints. It included tranquilizing a specimen of the footprint-maker and replicating in plaster of Paris the earlier unexplained footprints, especially the famous Shipton print from 1951. Solving that mystery took from 1956 to 1983. I searched a 1,500-mile span of the Himalaya, the south slopes (India, Nepal, Bhutan) and the north slopes in China’s Tibet. In dozens of wonderful expeditions, I visited almost every valley sys- tem across fifty years through that swath of mountains; I learned a range of local languages.

But, to my surprise, solving the footprint mystery did not answer the ‘Yeti question’. While my discovery went worldwide in the news media in the 1980s, I realized the Yeti is a symbol of an idea as well as a real animal. My quest evolved. It investigated a con- cept greater than a Himalayan Yeti mystery: the question of humanity’s relationship with the wild. By ‘wild’ I mean life uncontrolled by humans, that which makes Nature alive. For, aside from being a footprint-making animal, the Himalayan Yeti is also an icon of wild humans.

The questions may seem humorous—but when searching high Himalayan snows decade-after-decade... or leech-infested jungles—they are questions one does not want to first answer when unexpectedly discovering the animal. I searched the 1,800-mile west-to-east length of the Himalaya from Kashmir to the Burma border, and the 300-mile breadth from Nepal to central Tibet.